What Technology Will Replace LCD TVs?

I remember our huge 40 inch CRT TV we had in the front room, I thought that was as good as TVs could be, even though the back stuck out a few feet! Then the plasma TV erupted onto the market and turned it on its head with a TV that was so slim you could actually hang it on the wall. Finally LCD TVs came out and started to compete with the plasma ones, and HDTV came onto the scene recently too, so where are we going now?

A recent development has been the use of LEDs for the backlighting of an LCD TV. Previously they used CCFLs (cold cathode fluorescent lamps) which are bulky compared to LEDs. There are two versions of this technology, one where the LEDs go all the way across the back of the screen, which is the best way, or one where the LEDs are at the side and the light is directed to where it is needed. Either way you get a TV that is much slimmer than the CCFL versions.

3D televisions are starting to come onto the market now, but the reaction to them has not been that great because the technology is so new. The concept of 3D television is excellent, and I have seen firsthand how powerful 3D movies can be, but at the moment you have to wear funny glasses, that makes it less usable. The glasses currently on the market have to flicker constantly to give each of your eyes a different image, which can be annoying and disorienting, and I have seen a report which says the 3D effect does not work if you sit more than a few feet away from the screen.

But remember these are early versions of 3DTVs, so people who always have to have the latest gadgets will buy them, then the rest of us will wait a bit for them to work out the problems and then buy later versions instead. There are one or two companies working on commercial applications of 3D viewing without having to wear glasses, so hopefully that will filter down into our TVs soon.

OLEDs (organic light emitting diodes) are something to watch out for, but at the moment they are stuck with screens no bigger than about 13 inches in size. They are still trying to get around the problems of creating larger screens with this technology, but if they do crack it then you can expect to have a TV hanging on the wall which is mere millimeters thick!

So as you can see, the future of TV is going to be interesting, I can’t wait to see what it will be like in 5 years time…

If you want a huge LED LCD TV then at the moment something like the Samsung UN55B8000 is popular. 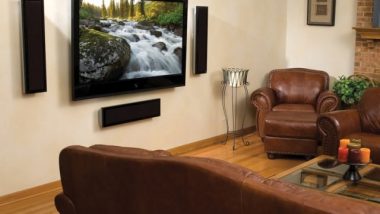 How to Install A Flat Panel Wall Mount